No Saturday Spankings this week because I am part of the madcap excitement which is the Corbin's Bend blitz!

As I may have mentioned before I am a big fan of Corbin's Bend, which is why I pestered them into letting me join the gang. I loved the first six books and am currently getting stuck into Kathryn R Blake's A Simple Misunderstanding. So far, it looks like we're going to be seven for seven. 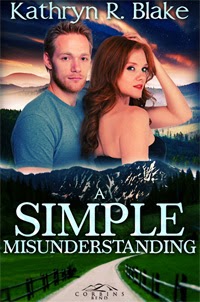 Though Arthur and Eleanor Benson have been practicing domestic discipline for three months since their wedding, he insists moving to Corbin's Bend, where domestic discipline is the norm rather than the exception, will revitalize their marriage.  Elly has doubts, but since Arthur is the undisputed head of their household, they move.  However, once Arthur becomes immersed in a community where spanking is not only permitted, but encouraged, his personality undergoes a dramatic change.  Accusing his submissive wife of being lazy, disorganized and disobedient, he employs creative methods of pain and humiliation to mold Elly from the imperfect woman he married into the perfect woman he desires.  And Elly finds herself a virtual prisoner in her own home, accountable only to the man who rules her life with a cane.


In his years as a vet, Jerry Douglas has seen what abuse does to animals, and he recognizes those same signs in Elly Benson during her daily escape with her tiny poodle to the dog park.  Jerry steadfastly supports the tenets of domestic discipline and enjoys the freedom Corbin's Bend offers its residents, but he remains fiercely protective of anyone in need of a champion.  And when he witnesses evidence of harsh handling, his instinct is to rush in and rescue.  Problem is Elly Benson is a married and consenting adult who insists all her bruises and welts are nothing more than a simple misunderstanding between her and her husband, until the day Arthur Benson takes his authority and discipline one-step too far, endangering Elly's life.

"Is dinner ready?" he inquired, opening the armoire where they kept their coats.  Though they'd selected one of the most expensive units in Corbin's Bend, the place didn't have many closets or cupboards, so they made do with new furniture they'd purchased to serve their needs.  They still hadn't gotten around to buying the china cabinet Elly needed to store their fine dishes and delicate figurines she'd collected over the years.
"Yes, it's waiting to be served.  Would you like me to place everything on the table now, or would you prefer to relax with your drink first?"
He frowned at her.  Now what had she done? Then, he pulled a large leather jacket out of the closet.  Jerry's jacket.
"To whom does this belong, Eleanor?"
She took a deep breath.  She'd done nothing wrong.  "It's Dr. Douglas's jacket." His left eyebrow arched, which meant she'd provided him with insufficient information.  "He's the veterinarian I spoke about earlier."
"I see.  And what, pray tell, is his jacket doing in our hall closet?"
She drew her lower lip in her mouth and skimmed her teeth over it.  Arthur preferred exactness to vagueness, however, informing him their armoire could hardly be considered a closet would not be good for her health, so she focused instead on how to present her afternoon conversation with the vet without drawing attention to her own error in judgment.
"He believed my sweater wasn't keeping me warm enough, so he lent me his jacket."
Arthur ran his fingers over the material and examined the lining.  "Why weren't you wearing your coat?"
"Muffin needed to go out, and I thought I'd be fine in a sweater and slacks."
With a nod, he hung the jacket back in the armoire.  "It would appear you misjudged—again.  Colorado falls can be bitterly cold, Eleanor, and you need to dress appropriately."  Closing the door, he turned to regard her through wintry gray eyes.  "Must I start laying out your clothing as well in the mornings?"
Not wanting him to see her growing resentment, Elly lowered her gaze.  "No, sir."
"You're my wife, Eleanor.  Every decision you make reflects back on me, and I will not have you prancing about the neighborhood improperly dressed."
She met his gaze only briefly, then returned her focus to the floor.  "I'm sorry, Arthur."
"So, you say, but I believe you need another lesson.  I think wearing an anal plug and a diaper through dinner might serve to remind you your actions have consequences."

According to A Domestic Discipline Society (ADDS), Domestic Discipline is defined as "the consensual practice of a subtle Dominant and submissive type of lifestyle, with the emphasis on the relationship first. Only then, (after the dynamics of the relationship are established) should spanking as a disciplinary action or any type of punitive ideas be discussed."  This means in domestic discipline, the intent behind any punishments should be to correct undesirable behavior, not cause injury.  However, even if there is a desire to hurt or cause pain, the motive is not to do harm.

So, what is the difference between hurt and harm?  And when should the desire to hurt another be considered acceptable?  For me, the difference lies in intent.  The reasons and goals behind the participants' interaction.

In my Corbin's Bend novel, A Simple Misunderstanding, Pendergast, a surgeon at Denver Memorial Hospital, asks the heroine, Elly Benson, who is a victim of abuse, about the welts and bruises he's observed on her backside.

"Legally, I must ask.  Did your husband cause your injuries?"
Elly swallowed and glanced at Jerry.  "Would you explain Corbin's Bend to him?"
Jerry wanted to object, since he suspected the activities of Corbin's Bend had little to do with the punishment Arthur had inflicted on his wife, but Elly gave him such a plaintive look, he relented.
Careful to use non-judgmental words, he explained how Corbin's Bend was a community that catered to individuals who had an interest in domestic discipline.  When Pendergast blinked, Jerry added, "Couples who practice DD often employ corporal punishment, which can include spanking, caning and whipping, but it is not considered abuse."
"What is it, if not abuse?" the doctor asked, clearly unfamiliar with the concept.
"A way to preserve marital harmony through spousal discipline."

Jerry's answer is simplistic, but to the point.  The goal of Domestic Discipline is to preserve harmony, not cause injury.  Both partners have agreed in advance to follow the rules and guidelines they've established with the goal of strengthening their relationship.  And to my mind, that shouldn't be considered abuse.

Kathryn R. Blake
Has her fourth novel with Blushing Books, "A Simple Misunderstanding" released.  Part of the Corbin's Bend series, this book is her third spanking romance where domestic discipline is primary to the plot.  Although Kathryn is relatively new to the spanking romance market, she is not new to stories where the hero paddles the heroine.  In fact, most of her novels have some sort of spanking in them.  However, even though Kathryn's heroes firmly believe in using corporal discipline as a deterrent, they have no desire to cause the heroine injury.  Even if they find it difficult to carry out a given threat or promise, they never shirk their duty.

Professionally, Kathryn has been a member of RWA since the early 1980s and has joined several local and special interest chapters such as OVRWA, COFW, MARA, FF&P, ESPAN and HHRW.  All of which have been instrumental in helping Kathryn's career.

Though feverishly plotting out her seventh book, which involves domestic discipline as well, Kathryn loves to hear from readers.  If you wish to learn more about Kathryn, or her books, you can see watch she's up to at any of the following locations:

a Rafflecopter giveaway
Posted by Etta Stark at 00:05