Ashe Barker’s Making the Rules would be just perfect as a BBC television drama. Something classy like Broadchurch or Happy Valley. It has all the right ingredients for good telly: Death, intrigue, family secrets, a grey rain-soaked Yorkshire village as two people – both, in their own way, visitors to the village - team up to understand a tragedy which happened there 20 years before.
I think the BBC should get on this as soon as possible. Not sure what their policy is on devoting significant amounts of air time to sexy spanky BDSMness, mind. Are they cool with that these days? Let’s hope so because those are the really good bits of Making the Rules.

The story begins in the small village of Mytholm Bridge in 1998. Ben is thirteen years old when a school friend’s family picnic turns to heartbreak with the loss of his friend’s little toddler sister.
Years later, history gets dredged up when Lily, a visitor to the village starts asking questions about the toddler’s disappearance. Apparently, nothing in Mytholm Bridge is quite how it appears on the surface.

The sex and spanking scenes are a joy to read. Ashe Barker delivers full kinky satisfaction in the bedroom department. As does Ben, come to think of it.

Not that their relationship is purely physical. Ben provides much needed emotional support and practical assistance to Lily as she attempts to uncover exactly what did happen on that fateful August day in 1998.

It is lovely to see Ben and Lily’s relationship develop from a spur-of-the-moment bit of fun to something much more meaningful.

The book wraps up with a neat and very satisfying ending which obviously I am not going to spoil for you. I thoroughly recommend you read it. Not least, because it might be a while before the BBC adaption hits our screens.

"I intend to chastise her severely"

I mentioned yesterday that I am currently working on a book. I thought I'd share a bit of it with you. It is tentatively called 'Fair Play' but that might well change because I am rubbish at titles.

It's a M/F romance/ But there's a bit of F/F spanky action too when one of the Spider Club regulars, Lady Jevington, decides that she is need of some serious discipline.

Lady Jevington strode into the drawing room with a thunderous look upon her face. She addressed 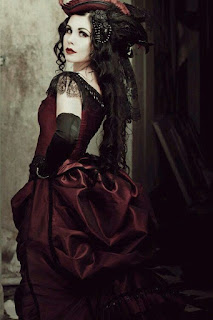 William: “Sir, your submissive has been making too free with her tongue and saying things she ought not.”

Flora was quick to reply. “Lady Jevington, please forgive me. I should not have mentioned you by name during the trial. I am truly sorry.”

“Silence, child. I am talking to your Master,” snapped Lady Jevington. “Mr B, I demand that you hand your charge over to me so that I may take her in hand.”

“What do you intend to do with her?” asked William.

“I intend to chastise her severely. She will have the punishment of her life. She obviously requires harsh discipline to ensure that she never commits such an error again.”

“Madame, I will not have my submissive hit in anger.”

Lady Jevington’s furious expression melted away in a moment and a warm smile took its place. “My dears, I am only playing of course. That’s all this ever is - a delightful game. I don’t care that my name has been mentioned in connection with the Ravener Trial. I am rich enough and independent enough to withstand the scandal. In fact, I rather think the notoriety will increase my social standing.”

Flora let out an audible breath.

“However,” continued Lady Jevington, the hardness creeping back into her voice. “This was not your submissive’s decision to make. I alone should have decided when I wished to my proclivities public. That control was taken away from me and I want it back. I want to punish Miss X. It won’t be done in anger. It will be calm, measured and done with a great deal of affection. I am very fond of the girl. She needs this correction for her own good.” Lady Jevington turned to Flora and addressed her directly. “As I said, my dear, it is just a game. But it is a game I take very seriously. I play hard.”

The book isn't quite finished yet but hopefully, you won't have too long to wait. In the mean time, you could always go and check out some of my existing books. Happy reading!
Posted by Etta Stark at 19:58 No comments:

Beauty and the Briefs

I am supposed to be finishing my current Work In Progress. I have been away from the Writing-Spanky-Fiction game for a few years (went mad, better now). And you know it has gone too badly today. Actual words have been written.

Not sure that they're the right words or that they're in a good order but I'll take that as a success none-the-less.

It's hard this writing malarkey. Not the writing part of it, you understand but the Not-Being-Distracted-By-The-Internet part. That's really hard.

So what's Etta's favourite bit of the Internet today, you ask. Well, it's fortuitous you should ask because I am just about to tell you.

I love Disney. There are plenty of previous posts on this blog to prove it. However, I didn't know that princess-themed knicker and bra sets were a thing that were missing from my life.

So come on folks, let's play Spot the Princess from her Undies! Some are pretty obvious. Like this one: 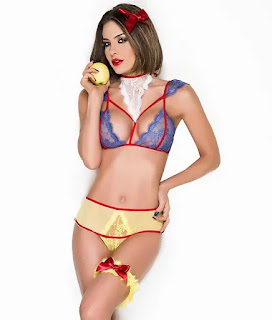 Others slightly less so: 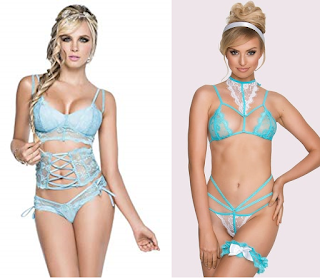 Oh yeah, that's a remarkable thing about the lingerie sets, the manufacturers are very coy about directly referencing the Disney heroines. So Cinderella is 'Midnight Curfew Fantasy Princess' and Elsa from Frozen is 'Ice Queen'. That Snow White costume up there is the Poisoned Apple Fantasy Princess Lingerie Set.

It's a bit baffling. 'Cinderella' and 'Snow White' aren't copyrighted names, you know. And the website seems happy enough to reference the princess names in their descriptions. The main page also references Mulan who doesn't even have her own themed sexy lingerie set!

However, we do get the following:

They're great aren't they? Especially for those of us who like belt out Disney show tunes at the point of orgasm. ("Paint with all the colooooooours of the wiiiiiiiiiind!" goes down well, I find.)

I'm not entirely sure what Current Gentleman Friend would make of them. Frankly, I'm not at all convinced that he's be able to tell which Disney princess I was supposed to be just from a few coloured wisps of polyester/elastene mix. And not just because he'd be distracted by my tits.

Still, he could always join in the dressing up fun. Maybe I'll order the Princess Jasmine costume for me and get this one for him:


Want to know more about the book review star rating system? Or find out what other books I've reviewed? Check out this page here.

I really enjoyed Rafe the Guardian. I think I have been reading a lot of quite dense, plot-heavy spanking stories lately. Ones where there are lots of hurdles to be overcome and anguish to be dealt with before the hero could get on with the necessary business of putting the heroine of his lap for a good spanking.

So this story was a breath of fresh air, I can tell you. Plot development is kept to a minimum in order to free up the most amount of time for wall-to-wall spankings.

The poor women in this book! Their arses have barely had the chance to cool from the last spanking before they're upended and being spanked all over again. It's great.

Our primary protagonists are Rafe, a retired lawman, and Mandy, the freshly orphaned daughter of a notorious outlaw. Rafe has been elected to take care of eighteen year old Mandy until she turns twenty-one. Her chaotic upbringing means that she doesn't have the manners or the temperament that Rafe would prefer so a LOT of spankings ensue. Mandy gets her bottom roasted almost within minutes of meeting her new guardian.


Mandy isn't the only lady getting her bottom spanked in this book. Rafe's sister, Katie is also at the receiving end of some very hands-on discipline from her new husband, Wes.

Then we meet Rafe's parents and his two brothers and, blimey, it turns out that the whole family's at it. Seems like the men in that family are attracted to the sort of women who need a good spanking and happily they're all very keen to deliver it.

The book is fast paced and often very funny. The characters are well-drawn and there are several surprises as we get to know them all better. The romance between Rafe and his ward is very sweetly done. Which is great because Rafe might have a very hard hand but you know that he's an absolute sweetie really.
Posted by Etta Stark at 20:52 No comments: