The new season of Corbin's Bend has begun! You might not have realised that books could come in seasons, but the big spanky juggernaut that is Corbin's Bend can do what it damn well pleases. Thank goodness. It's already breaking new ground as quite possibly the Longest Running Multi-Author Spanking Romance Series. Has anyone been onto Guinness World Records about that? 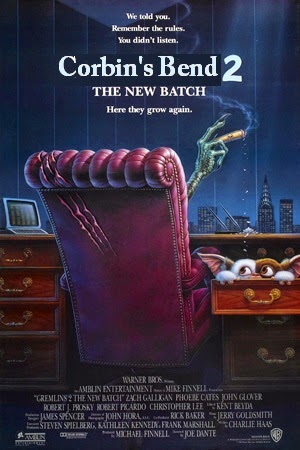 In the interests of full disclosure (and in the interests of mentioning again because I can still barely believe it), I am one of the authors of the the Corbin's Bend Season 2 collection. My book East End Girl will be coming out in early December.

That's not the only reason why I'm so excited about the first book in the new season, mind you. I was getting stupidly excited about Corbin's Bend long before I managed to sneak into the gang like a fiercely determined groupie.

Thianna D's Chemistry of Attraction has just been released and is a fantastic start to the new season. You kind of knew it would be, though. The girl's got form. Thianna is the brain (and almost certainly the looks) behind the whole Corbin's Bend project. She wrote the first book in the series, Finding Their Bliss  and the last book in Season One, a sweet little prequel Where They Both Belong which took us right back to the beginning of the World's Only Spanking-based community.

In Chemistry of Attraction, we meet ex-marine Brandon Delt who has just moved to Corbin's Bend in order to study music and move on with his life following his divorce. Brandon is friends with Benjamin Steppings - the lovely Jonathon's other half - and it's always nice to see more of Benjamin and Jonathan. I liked seeing Benjamin leap to Jonathon's defence when somebody rudely criticised his autumnal decorations. That's gallantry right there for you.

Brandon has a few issues in his life to deal with - including a painful arthritic condition that often makes walking difficult - not to mention the fact that his ex-wife has moved on with her life by marrying his own cousin. Luckily he meets the delightful - if slightly gauche - Carodine, a newly-graduated chemistry major who has come to visit her grandparents in Corbin's Bend for a while in an attempt to relax before she finds herself a job. He doesn't muck about does Brandon. It only takes a minute or so for Brandon to decide that Carodine is a woman he wants to spend more time with and he sets about ensuring that that is exactly what happens.

At the time of their first meeting, Carodine has only just discovered the unique Just-For-Spankos flavour of Corbin's Bend (which is a slightly awkward conversation to have with your grandparents, I reckon). She doesn't know if she's into the idea of discipline but wanting to free herself of residual guilt, she's willing to give it a go.

How many women is that now who have wandered into Corbin's Bend with no idea of its spanking credentials before discovering that spanking is just the very thing they needed after all? She must be the fourth at least. I think there must be something in the Corbin's Bend water.

The relationship that Brandon and Carodine embark on threatens to become derailed a few times, not least because Carodine seems to have some pretty major hangups about sex. Brandon helps her overcome her prudish preconceptions and persuades her that enjoying sex is not only OK, it's a fantastic idea all round. The biggest threat, however, comes from the fact that Carodine is only supposed to be staying in Corbin's Bend for a few months and although the two of them try to convince themselves that they would be happy with just a summer fling, it becomes increasingly obvious that neither of them want the relationship to end.

The spankings Brandon  dishes out range from the rather sweet and tentative spanking that he gives her on their first date in order to assuage her curiosity ("Could you show me how it feels? If you wouldn't mind.") to a rather firm disciplinary punishment which carries its own hidden message via a very special paddle.

Brandon is a slightly unusual romance hero, what with his gammy leg and being completely bald head - all the better to show off his cranial Celtic tattoo. Every time I look at the book cover, he reminds me of Karl Howman which will mean absolutely nothing to most of my readership unless Brush Strokes and Babes in the Wood became somehow hugely popular in the US and I really, really hope that they didn't. Because sometimes we British make really, really good groundbreaking television. And sometimes we make terrible sitcoms with Karl Howman in them.

In a recent Corbin's Bend blog post, Thianna said that the movie star who should play Brandon is Vin Diesel.

Vin Diesel may in fact be exact opposite of Karl Howman. It's kind of a relief really.
Chemistry of Attraction is an absolutely lovely start to the new season of spanky Corbin's Bend adventures. The heroes are interesting, flawed, believable and very likeable. The story also provides some fascinating opportunities to get to some of the Corbin's Bend regulars - like Carodin;s grandparents Jason and Rose Rolson and of course, Jonathon and Benjamin - a little better.

Tara Finnegan (author of Season One's Exile To Unity) is supplying the next book in the series, His Forever Summer which will be available on the 22nd of October. After Chemistry of Attraction, I would say she has a tough act to follow, but given how much I enjoyed her previous Corbin's Bend book (even if it did have me sobbing in the bath at one point), I am certain that Tara is woman enough for the task.