I always seem to be slow up on the uptake when it comes to stuff. Never there at the beginning when it comes to books and television. I didn’t start reading the Harry Potter series until the release of The Goblet of Fire, didn’t get into Breaking Bad until the whole thing had been already wrapped and finished. I still haven’t seen a single episode of Game of Thrones.

And clearly it’s the same thing all over again with the Daddy of the Month Club. The series began in March this year but I’ve only just found out about it. Four months late to the party. There is a new story in the series published every month so I have a lot of catching up to do. 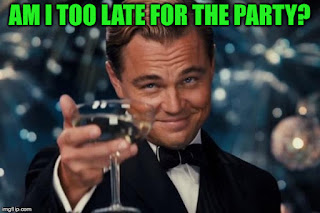 The first story in the series, Good Luck Daddy, is absolutely wonderful. It’s a tricky subject for what has been styled as a Rom Com series as it deals extensively with bereavement.  Austin Whittle was Jasper’s best friend and Keely’s big brother. After he is killed in combat, Jasper and Keely find themselves the remaining two survivors of the little ersatz family that the three of them had maintained since the death of Keely and Austin’s parents.

Keely has always been like a little sister to Jasper. Except that now Keely is all grown-up and Jasper’s feeling towards her have become rather more romantic – and, well, sexual. Which is all perfectly hunky dory because Keely feels exactly the same way about Jasper.

So we have two attractive, sexually frustrated individuals in love with one another currently sleeping under the same roof. What possible obstacle could be getting in their way and stopping the inevitable Happy Ever After happening round about page 6?

Jasper’s bloody stupid Code of Honour, that’s what. The damn fool is too bloody busy mithering over the ethics of fucking his dead friend’s sister that he comes very close to mucking the whole thing up. Repeatedly.

I mean, it doesn’t stop him breaking this self-imposed ‘Bro Code’ and enjoying some delightfully Dommy sex ‘n’ spanks with Keely. But then he gets all funny about it afterwards. It’s a wonder Keely put up with his nonsense, really.

Despite the sadness that runs through the book, this is a very funny story. The chapter titles are hilarious, the "Pants-Off-Off" scenes are a delight to read and the verbal sparring between the two heroes is both witty and authentic-sounding.

There is also a Prequel , Daddy of the Month Club. (Currently free on Amazon!) I would recommend that you read this before you read Good Luck Daddy rather than afterwards like I did.

There are twelve women in the book club so it’s a little hard to keep track of them all on this the first introduction but as each story in this series concentrates on a different member of the group, I expect to get to know them better soon enough. The second book, Fool Me Daddy is already purchased and on my kindle. I can’t wait to immerse myself in the funny, sexy world of the Daddy Doms. 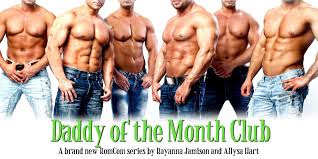